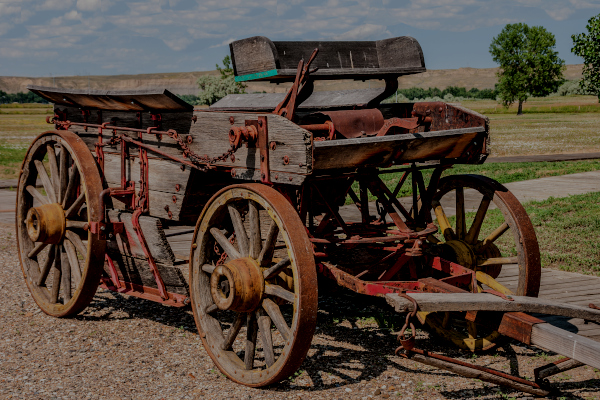 It was a day just like this. Clouds moved in fast. A cold drizzle had just started. Visibility was good, but it wouldn't take much more rain to turn the road to mush. So I gave the signal to double the pace. Sugar and Dakota knew what to do before I even adjusted the reins."

The lead driver of the caravan spit into the fire as he walked around the campsite. The tale he was spinning needed a pause for effect. We had just signed on to journey North to Etonia. What started as a review of safety protocols and trail etiquette had become storytime. Not that I minded, this was good content, and I was taking notes, but I could see a pair of Nobles begin their own conversation.

Charlie continued, "I called back to the wagon, 'Tie down your gear, make sure you stay sit'in.' It was going to get bumpy, and the caravan doesn't stop. If you fall off, we might slow down, but we ain't stopping."

He had completed another circle around the campfire. He tossed some phosphorous or similar material in the fire to make it flair. The Nobles looked over in confusion.

"The caravan doesn't stop in the K'hala Swamps. We stop, we get attacked. If you lose your hat, buy a new one in Etonia. Keep your coin on your person cause if your bag falls off the wagon, you're gonna need to buy new gear. If we have to go full gallop and you aren't strapped in, I'll thank you for your sacrifice when the rest of us make it to Etonia."

That was the end of the safety talk. I like to think Charlie felt the Nobles reached the proper level of indignity for the message to sink in, then he turned his back and walked away. 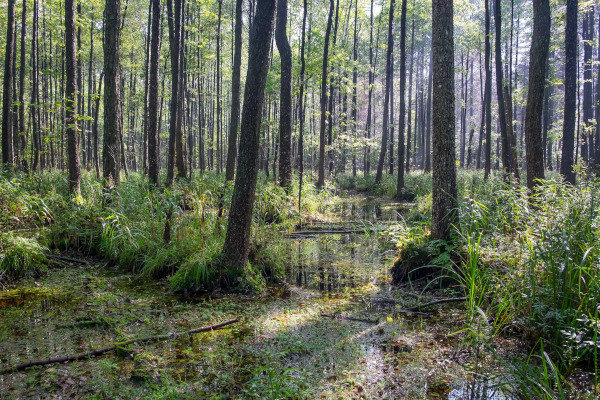 View from the Swamp Road by Robert Pastryk from Pixabay

In addition to the other drivers, Charlie had a few scouts and woodsmen on his crew. I talked to a few of them, but my favorite was Will. He knew his way around the camp and was quick to navigate us around hazards. Charlie kept Will on the front wagon with him, so I figured that was a good spot to be.

The wisdom of my choice became clear when the first arrow flew over my head. Will had his bow up and was sending shot after shot into the trees while he called out, "Charlie, at least three lizards ten o'clock!"

Charlie had a whistle he used to signal the other wagons. A long shrill note rang out, and the wagon jerked ahead as he urged the horses forward. I had not known that horses could generate more pull as a team than what the math should add to from them working individually. I felt it in my neck for a week. However, poor Phillip had it worse - he fell off the wagon.

He was lucky he rolled to the side. Otherwise, the next wagon would have run him over. Will called out, "Traveler overboard!" Charlie tied the reins to a hook beside his seat and jumped off the wagon. Will yelled, "Coming through," and worked his way up to the front. I don't think the horses needed him to take the reins. They knew this road well.

Charlie picked himself up and ran back to Phillip. The man was still lying on the ground. I watched one wagon, then another, and a third pass them. Finally, they were up and hands reached down from the last wagon. The two men were able to get aboard. Arrows continued coming from the trees, but none hit the wagons.

Will called to me, "Toss that last bag to the side of the road!" I loosened the straps and struggled with the heavy but floppy contents. "Toss it!" Will urged again. I managed a good lob, and it flipped once in the air and rolled a couple of times when it hit the ground.

Driving to the Anhult Woodlands

They didn't keep the horses at full pace for long. We needed to conserve their strength. There was no break until we reached the upper woodlands. Charlie ran back up to the front wagon when the pace slowed. Will came back to his position and settled into the seat beside me.

"Smoked pork." He smiled. "Charlie always has a backup plan."

Huh. I leaned back in my seat to consider what had happened.

Will continued, "They learn. They fire arrows now to spook us, so someone might fall off, or to make supplies get dropped. They don't chase the caravan but go after what was left behind. We figure if we play along, everyone wins. Just make sure you are all strapped in."

Everyone on the wagon tightened their restraints without question.

Will leaned over to me and whispered, "Charlie would never leave anyone behind."

My inspiration for this character comes from a mid-1800s real-life stagecoach driver. My character is solely my imagining of this person and does not reflect who they were in real life.

"A swashbuckling, one-eyed stagecoach driver lived her life disguised as a man. After her death, the revelation that she was a woman provoked widespread astonishment." Charley Parkhurst Overlooked, NY Times


Charlie is a Non-Player Character (NPC) in my Mystery of Thorngage Manor tabletop roleplaying game (TTRPG) one-shot adventure and can also make appearances in my Race to the Ruins and Fish, Biscuits, and Goblins one-shot adventures.