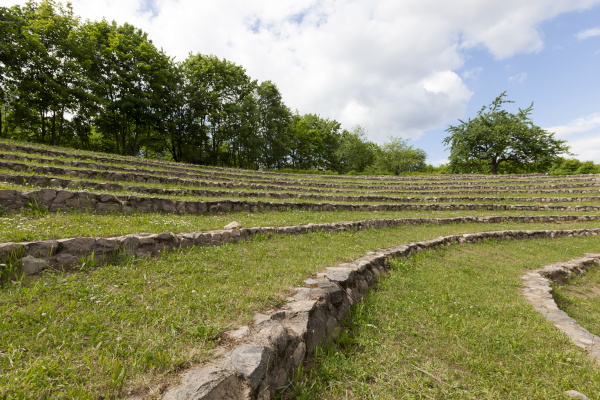 The air, oh the air, was finally crisp and clear. The clouds covered the sky and brought an embrace I had missed so much. As I walked from the city to the meeting place, the grass crunched with a thin frost.

Two guards walked with me. I instructed them on how I expected them to interact with the Queen. Their bruises bolstered the claim that the Storyteller uprising had to be dealt with swiftly. They struggled on the walk but would not let me down. I told them how much I valued their sacrifice.

The clouds hung over the city as we walked through the forest. Our destination loomed in the distance. A tall hill that stood by itself high over the trees. The blinding sun baked the ritual circles at the top of the hill.

The trees stopped at the crest of the hill. We stepped out into the sun and down into each concentric circle. I shared the prayers of the ancient druids with each step taken further into their domain.

The queen arrived with two hunters, adorned with greenery and billowing cloaks. I used to be impressed with her presence, but that curse had long been broken. She spoke the words to enter each circle. The words that kept this meeting place a neutral ground to negotiate. When she reached the center, she wasted no time.

"Glain, explain your actions, or you will face a tribunal."

"Gladly, my Queen," I replied. "Your Storytellers broke free of their bonds and attacked my people. These brave guards suffered the brunt of the assault. We could not wait for your slow deliberation. We had to act. The library decoupled, and the Storytellers decommissioned."

Her fury was only held at bay by the ancestors' power embued in the circles.

"Glain, you hold not the authority or nor power to perform such an act." She sent one of her guards to the library to verify my claims.

I was not impressed. "My Queen, I do have the power." I pulled out the petition, signed by the people of the city. "The nobles have relinquished their held debts to me. The people have committed me to take action for them." The document pulsed with the power of the deal struck.

The Queen took a step back. It was glorious to see. She waited at the far side of the inner circle until her guard returned. She knew what she faced at that moment, and I put the finishing piece in place.

"The people are angry. They will rise against you. If you wish to quell the people, turn these lands over to me before darker forces can separate us. I only wish to protect them."

I was glad to finish the story of my epic triumph, "It was just as you said. She would do anything to prevent you from gaining ground. Her fear and resentment blinded her to my obvious intentions. The frost crept over the crest of the hill as soon as she transferred her power. She retreated when she saw it, unwilling to risk herself to save a single subject."

"You have done well, Glain, Lord of the Land. You may move my armies forward. We strike before she gathers the will to fight."

I bowed low to the Queen's sister.

I appreciate you reading my flash fiction article. This story fleshes out some ideas for a novel I want to write. Thanks to my Twitter friend Anne Apart for the Perspective prompts. For different writing perspectives of this same event read Storyteller's Home, Storyteller's Dilemma, and Storyteller's Discovery.