Anhult Wildlands    Storytelling Projects      Echoes of the Past      Peace 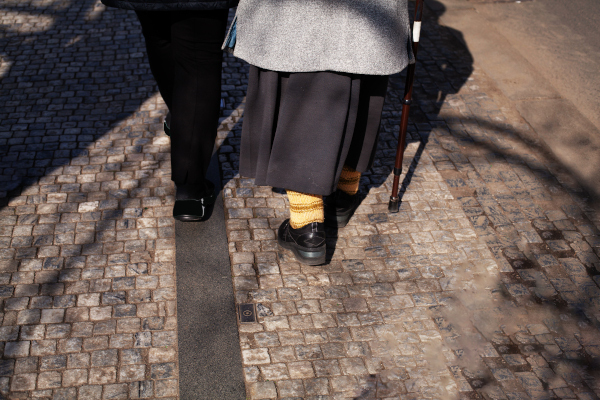 Grandma, let's keep moving. We need to check on Grandma Fusun and Grandma Hazan. Plus get to market and then pick up your herbs." Sanem hurried her grandmother down the street.

"Basrin, how is that daughter of yours?" her grandmother called out.

A large dock worker called back. "She is working hard on her studies and soon will be a force to be reckoned with! I'm glad you are getting out. Have a good day, I'm off to the pier."

There was a conversation like that about every 20ft as Grandma Nuray greeted friends and neighbors. "Keep those feet moving Grandma. I have work to do." Sanem would say. She was in charge of checking on the elders, making sure they got their food, medicines, and other supplies.

It was a bit like herding cats and they were a stubborn lot, but she was glad that this was her job. She was paid by the city to do this work and had to be firm. The elders were not used to living in the city and in the forest they would have had extended families to help care for them. Internally, she loved every story the elders shared and every antic they pulled. They were vibrant for their age.

The pair approached a door. "Grandma Fusun, are you home?" Sanem knocked and opened the door. Grandma Fusun was busy fussying over a big pot of stew. "I'm just checking in, we are going to the market, do you need anything?" Sanem asked.

"Too bad these old hands can't dig in the dirt. I'd have grown my own carrots for this stew," huffed Grandma Fusun.

This was code. Sanem knew it, "I'll get a you a bunch of carrots from the market. We'll be back."

Sanem hurried Grandma Nuray back out to the street. They made it about half a block. Sanem saw Grandma Hazan in her small back yard bending down to tend to her garden.

"Hey, Grandma Hazan, what are you working on today?" Sanem called, keeping Grandma Nuray out by the street.

"Just some weeding Numsad." That was a nickname, in their tradition, for young women who were becoming adults. Someone they respected, like someone in Etonia saying "Dear" but Numsad is more formal like "Ma'am". It also had the connotation that this was a woman carrying the weight of the next generation.

Sanem continued "We are heading to the market, need anything?"

Grandma Hazan looked up, "Could you order some warmer nights? These lettuce don't need a frost."

Sanem didn't think Grandma Hazan was talking just about the lettuce. "Are you using the wood for a fire each night?"

Grandma Hazan replied "I don't need a fire every night."

"Grandma Hazan, I will get you some more firewood. Don't struggle all night if you are cold." Grandma Hazan waved her on.

Sanem had a pleasant walk with her grandma to the market. They got the supplies they needed and the extras for Grandma Fusun and Hazan. They stopped at the herbalist on the way back and added two tonics to the haul for the day.

They visited with Grandma Hazan and got her fire going. They had soup at Grandma Fusun's. With the sun setting, they headed back to their house. The house was small but comfortable. Sanem said a blessing for her brother, who had joined the city guard. He was part of the expeditionary force sent into the forest.

Aside from missing her brother, Sanem knew this was a good day. She laid her head down that night in peace.

I appreciate you reading my flash fiction article. As part of The Storytelling Collective's Flash Fiction Feburary 2021, this article answers the prompt "Peace." It is also background for the World Anvil "On the Shoulders of Giants" writing challenge. "Write about a historical civilization or culture that shaped or greatly affected your world."