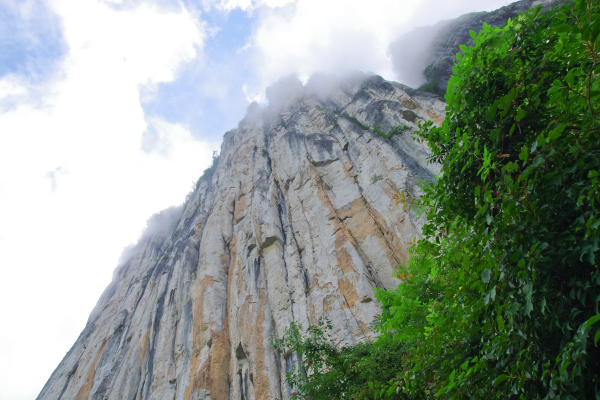 My constant companion on the Long Road North. An unerring guide lifted from the land itself. Your hard judging face always looking down at passing wagons. Never weeping but full of secrets.

The Anhult Rise stands two hundred meters straight up on the far eastern edge of the K'hala Swamps and Anhult Woodlands. Some event in the distant past broke the world and tore the fractured rock along this thousand-mile-long ridge. The steep barrier separated civilizations and controls the weather to this day.

Its height fills the woodland rivers and swamps with water. Storms coming off the seas to the West send their clouds and dump rain on the ridge before the western face. On the East side, the buckled and twisted land descends slowly into the Kobold Plains. Little rain falls on the Eastern side, but there is nowhere for the water to drain out of the basin. Shallow lakes, fens, and bogs formed over centuries in the middle of the plains.

Some believe a vile misuse of magic ripped the land apart. Caused by an ancient elvish sorcerous who tried to conquer not only kingdoms but the land itself. A cautionary tale that few of the wizards of the current day consider. There is little evidence of this origin except for a few stone tablets found from the ruins of old city-states in the South that mention the appearance of the Rise. The tablets are currently at the Repository in Coral Gate.

Never considered a natural mountain range and located past the barriers of the K'hala Swamps and Bay of Claws it was untouched for an age. No one came to mine it until the discovery of Everst Silver when the Etonia council began building Forest Roads. There are still no permanent paths or passages over the ridge.

The sisters looked at each other. The daunting climb ahead of them made Jenna pause. "Sylva, I just need another minute to warm up."

"You will not want to miss out on that view. Plus, if I get a head start, you won't be able to catch me." Sylva chuckled, finished tying a braid in her hair, and headed over to the towering wall of rock.

The nearly vertical wall had weathered for many years. A fine layer of gravel and dust covered every surface. The sisters needed to bring their A-game to complete this climb. They checked the rock hammer and safety ropes attached to their harnesses. Jenna looked back at the scribe, measuring the position of the sun.

"Belamy, you better be paying attention! We are counting on you to catch us if we fall."

"Don't worry, I got you covered." Belamy waved a feather. He had it resting on the work table with his surveying equipment.

With a sigh Jenna grabbed a rock before Sylva got ahead of her. They got into a rhythm and echoed each other. One reached for a new handhold. The other used her legs to push up. A new foot position, new handhold, and up the Rise they went.

The top of the Rise provided an epic view of the forest. There was nothing but a sea of green. Waves of leaves shifted back and forth in the gentle breeze. They stood above the flight path of birds. They were eye level with the clouds.