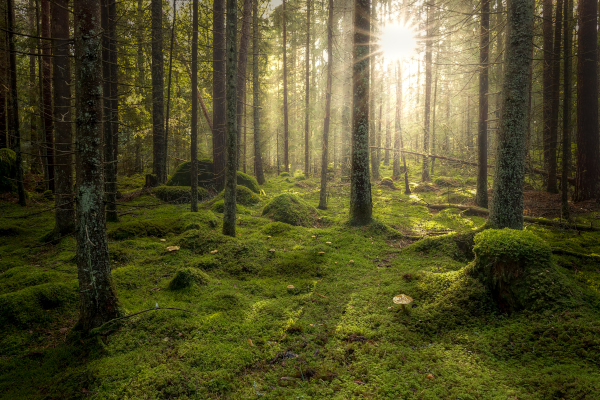 Giant trees loomed overhead. Scant underbrush left few places to hide. Due to luck or flaw, he could not tell which, a sliver of light broke through the canopy at a rocky outcrop. The warmth allowed three bushes to spring to life. Kibber sat hidden against the rock, covered by the broad leaves of the bushes.

Such a long sigh came from his lungs. It snapped his attention to his breathing. He held it out for a long time, not letting new air in, a necessary purge to regain an inner balance. Light reached between the leaves to glisten on the stick he had carried for hundreds of miles. He had weaved the tale of his entire journey into its bark.

For what had to be the hundredth time, he grasped the stick tight in his left hand and spoke the words taught to him. Tiny tendrils reached up from the stick, attaching to his hand. He let his mind wander to a reflection he had deposited long ago.

One day, my travels around the city took me through the library. I met my best friend at the library. She was one of the librarians, a Storyteller. They absorbed the stories brought to the library and saved them in the trees. I lost track of the number of times I stopped to see her. I would bring her a flower or a story.

Some days, I didn't have a story. One of those days, she had a flower waiting for me. It was not a gift out of obligation or a trade. Everyone in the Queen's domain angled for a trade. The currency of emotion and debt became nearly unbearable. I tried to minimize that for those around me like my parents had bravely done. Few would reciprocate. It was quiet resistance and finding a friend that valued that was wonderful.

Another day, she gave me a log. She said it was for me to keep track of my own stories, a travel log. It was more of a stick than a log, but I didn't correct her. She showed me how to deposit a story. The stick had three green leaves and vibrated slightly when in my hand. The vibration was like a tiny song in the wind.

On a road paved with petals, Kibber walked silently across the frozen plains. The land was changing. Frost coated the ground all day. The wind had a bitter edge. But, the road proved a safe passage. It continued through a barrier marked by tall trees. Warmth radiated across the border. Kibber stepped through and took off his winter gear. With a sense of relief, he held the travel log.

I made a deal. A trade so that I could still see my friend. Now that she is gone, I realize the price was too much. Winter had come to the city, but what would it have mattered if we could have more time together? The deal required I report on her progress to the Lord of the Land. Sharing what I could, I convinced myself I was keeping her safe.

One day, when I returned, she was gone. The entire day I waited, and a shadow hung over her tree. Something was wrong so I am walking to Eylium. That is what the elders used to do. I will report the man that brought the winter and took my friend. They will help.

While his traveling companions were busy with dinner, Kibber pulled out his travel log. He held it tight and whispered the words it needed to hear. The camp site was a flurry of activity while Kibber tried to concentrate. Around him leaves littered the ground and cold air filled the ruins around the campsite. 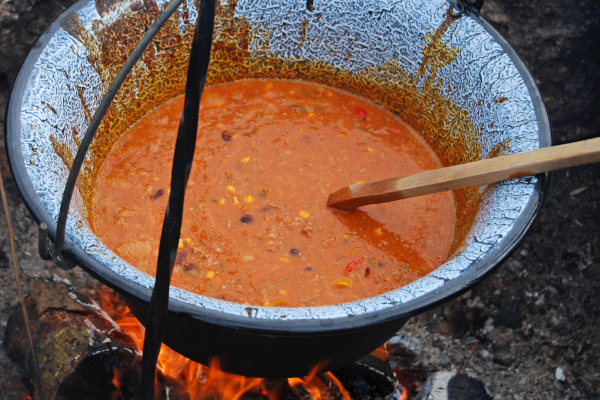 Stew on the campfire by iStockPhoto.com\Zwilling330

"Emanuel, sit down and eat with the others."

"It's the Spring Cross-Quarter Day and we are nearing the abandoned Arms of Eylium training facility. I just have a feeling that we will find the Autumn Library this trip. It has been several years since I have been to Eylium. I fear I will need to return soon as I am out of leads."

He paused to get more food out of the pot over the fire for his companions.

"Weather is bitter cold, as usual, but the campfire is doing me good. We made it 14 miles today. The little feet of the Malen'ki were moving fast to keep up today. Verin was sure they would be good luck." Kibber looked over at this companions, I think they might just be along for the Food."

Kibber completed the entry he started by the rocky outcrop under the bushes. He kept his words quiet and scanned the forest while he talked. This place was not like the frozen plains or the heat drenched forests of his home.

"I found the portal where the Lord of the Land banished my friend. It is just me traveling through the forest now. I could not bring the Malen'ki along. They are bound to the land of our birth. The walk has been so quiet without them. When I arrived, a copy of my friend's tree was also on this side. But, it was broken and decayed. Cleaved nearly in two and charred by fire.

With few options and no friends, I had to run as men hunted me. I had many detours upon entering this new domain. However, today when I stopped for a moment to rest, I heard music in the whistle of the breeze. It was a song like I heard when I grasped my travel log. My friend is alive. She is near, I can hope."

I appreciate you reading my flash fiction article. This story explores the 2022 World Anvil Summer Camp theme of Discovery. My flash fiction doubling as worldbuilding may be used as background for ttrpg games or as content in other writing projects.

Answering: "A travel log or other document associated with discovery."
Visit George Sanders's Competition Page Check all other answers to this prompt Competition Homepage